Praised by The New York Times for its “incisive, agile strength,” Downtown Voices is a semiprofessional choir made up of volunteer singers and GRAMMY®-nominated members of The Choir of Trinity Wall Street. Directed by Stephen Sands since its 2015 inception, Downtown Voices has performed works by Beethoven, Brahms, Rachmaninoff, Pärt, Webern, Ginastera, Janáček, James MacMillan, and Philip Glass, in addition to premiering Spire and Shadow by Zachary Wadsworth, a large-scale commission for the 250th anniversary of St. Paul’s Chapel.

The group made their Carnegie Hall debut in October 2022 with the Buffalo Philharmonic conducted by JoAnn Falleta for the Lukas Foss Centennial Celebration. Other recent performances include Orff's Carmina Burana at The Ross Farm, Compline by Candlelight and Lux Aeterna concerts at St. Paul's Chapel, and Beethoven’s 9th Symphony at the Church of St. Paul & St. Andrew. In past years, the ensemble has hosted Community Carol Sing concerts, Arvo Pärt’s Passio, Beethoven’s Mass in C, Dvořák’s Mass in D, and Britten’s Hymn to St. Cecilia. Downtown Voices has been featured several times with Andrea Bocelli and can be heard on the epic recording Philip Glass: Symphony No. 5 released by Orange Mountain Music.

Downtown Voices and the NOVUS NY string quartet presented works by Undine Smith Moore, Jessie Montgomery, Jenni Brandon, and David Lang in selections that explore composers' takes on an “anthem,” or a song that represents ideals. 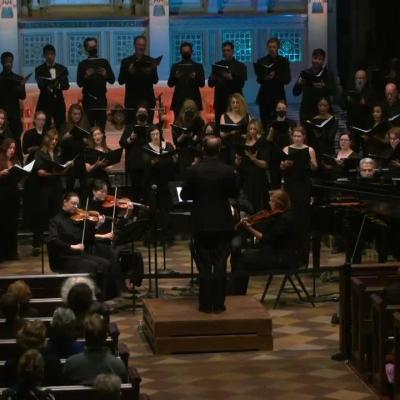 Lux Aeterna celebrates the persistence of light through times of darkness. Downtown Voices presented this illuminating spring concert with masterpiece requiems of solace and beauty by Duruflé and Fauré. 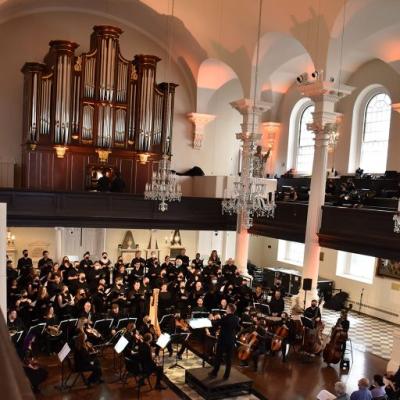 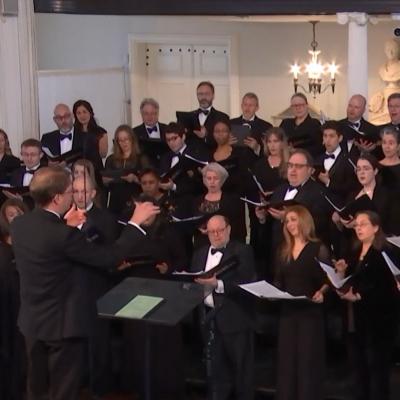 Festival of Lessons and Carols

A cherished holiday tradition for congregations around the world, the service of Lessons and Carols for Advent tells the Christmas story through readings and musical illuminations. 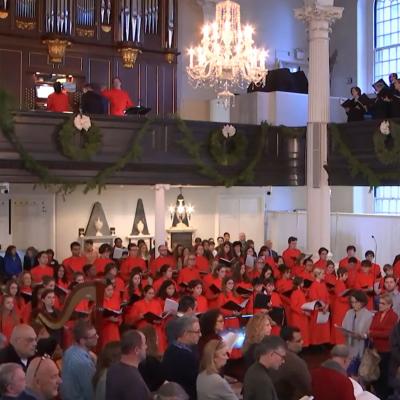 This concert features iconic works of two of the most compelling and influential composers of the 20th century: Arvo Pärt and Francis Poulenc. 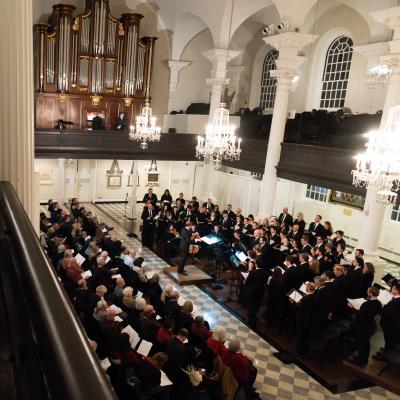 At their final concert of the season, Downtown Voices and NOVUS NY performed two folklore-inspired works written in 1937: Orff’s epic Carmina Burana and Bartok’s Sonata for Two Pianos and Percussion. 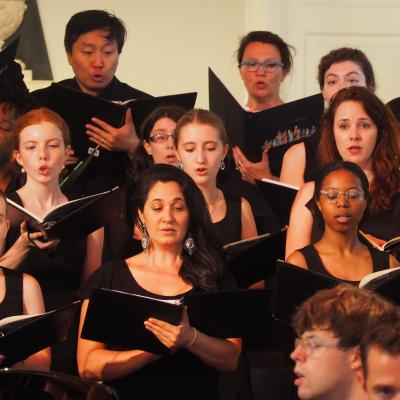 Downtown Voices is accepting new high-level volunteer singers. Auditions will take place on March 22. If you are interested in auditioning, please fill out the form below and you will be contacted with further instructions. All applicants are required to submit a video sample of their singing and after a screening process, successful applicants will be invited to audition online. These auditions will include sight-reading from a four-part hymn, singing a prepared choral piece, as well as performing an aria or art song of the singer’s choosing.

Downtown Voices rehearses on Wednesday evenings, 6:30–9pm, with occasional rehearsals extending to 9:30pm, from September through June at Trinity Church and St. Paul's Chapel in Lower Manhattan. Choir members must attend at least 80% of rehearsals and are required to attend all dress rehearsals and concerts. Please contact the chorus manager if you have questions.

“Downtown Voices is the group I've been looking for for years -- one in which I feel challenged without feeling left behind. Every rehearsal with the Trinity professionals is like a master class.”

“The collaboration with The Choir of Trinity Wall Street has been an incredibly rewarding and enriching aspect of being in this group. It's amazing to have the opportunity to sing alongside some of the most talented and accomplished choral singers in New York City.”

“The repertoire performed by Downtown Voices has been incredibly fulfilling for me to sing. It is challenging, diverse, exciting, and innovative. The performance quality and collaboration opportunities with Trinity's instrumental ensembles are outstanding. Being able to rehearse in Trinity Church and St. Paul's Chapel has been inspiring and extremely rewarding, especially having grown up visiting and admiring these two spaces. I could not be more grateful or happy to be a part of Downtown Voices.”